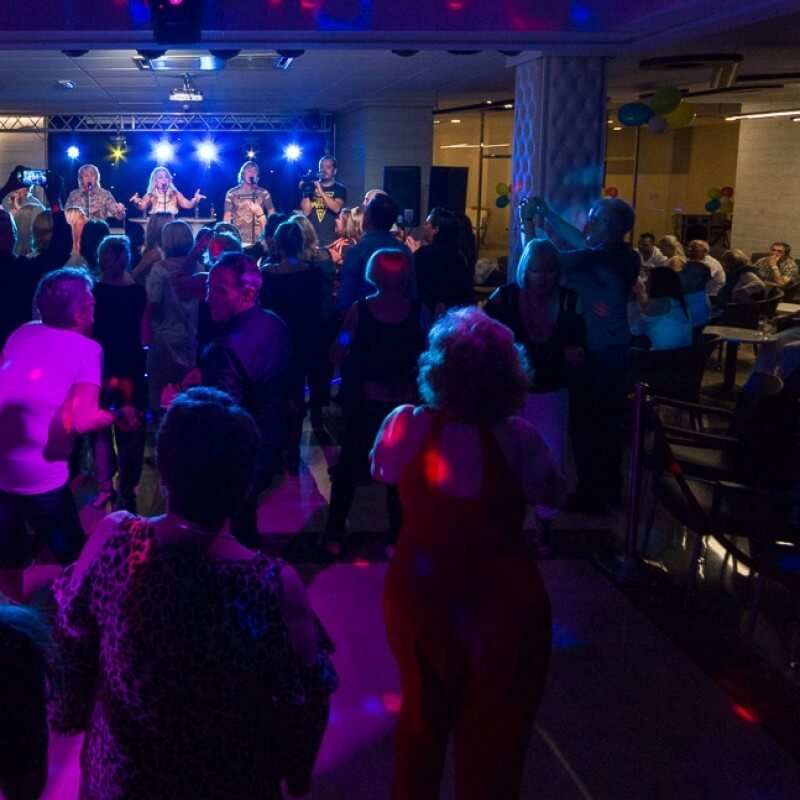 “Music is a way to dream together and go to another dimension.” - Cecilia Bartoli

At Sandos Benidorm Suites, we believe that music is necessary in all moments of our life, but especially on holiday! Our modern theme property is designed to indulge music-lovers and offer a complete musical experience that’s also complemented throughout the year by a series of concerts featuring hit groups from the 70s, 80s and 90s.

China Crisis performed their only concert in Spain on September 29 and was held at Sandos Benidorm Suites. The vocalist, Gary Daly and guitarist, Eddie Luton gave a concert for guests staying at the hotel at the tour date. They performed some of their most famous songs such as "King in a Catholic Style" or "Wishful Thinking". The Meet & Greet service allowed clients who signed up for it to enjoy an exclusive interview with the band, chat and to take pictures with them.

The pop / rock style group was born in the 1980s, and since the beginning they positioned themselves in the official UK music charts. Also, their music crossed over, expanding throughout Europe, Australia and America.

On May 25, 2018 we re-lived the best of British singer Kenny Thomas. And it was a success! Our guests enjoyed a live concert plus, those who hired the Meet & Greet service had the opportunity to meet with the singer and take pictures with him.

Kenny embarked his career as a professional singer at the age of 15 along with a group of friends who wanted to imitate jazz, funk and soul music. A few years later, he managed to get money for recording a couple of songs. Then, a musical executive and friend of his father listened to one of his songs and after listening to his great voice, he decided to work with him.

In 1991, his song "Outstanding" positioned in number 12 in the UK single charts. From there on, the musical career of Kenny Thomas was a success, but after recording his 3rd album he decided to withdraw from music. It was not until 2004, he returned to the musical world with songs like "Gotta give it up" or "You do not know".

The past 3rd of March 2018, Shakatak the famous British jazz funk band performed in a live concert exclusively for our guests. The group, recognized worldwide for songs such as "Night Birds" (1982) and "Down on the Street" (1984), became well known in the 80s, successful all over the world.

Not only the guests were able to assist to the concert but also some of them were able to meet & greet the band and save this incredible experience with pictures.

On November 24, 2017, we travelled back in time to 1981 Eurovion music festival . Bucks Fizz performed live with versions of some of their international hits like “Making your mind up". This Eurovision British music group from the 1980s came to play live, exclusively for Sandos Benidorm Suites guests, giving us a magical night while we sangag along to all their songs. Guests were also given the chance to talk to the group with a special Meet & Greet session where they could even have their picture taken with them.

On July 16, 2015, we hosted the first concert at Sandos Benidorm Suites with Spanish musical group Tennessee. This band marked an era on the Iberian Peninsula in the 80s and early 90s with swing and rock n’ roll songs like “Hoy estoy pensando en ti”, “Du-Dua Ding Dong” and “Tonto por ti”. The group also collaborated with other Spanish artists to film the Spanish-language version of the musical Grease in 1998.

More than 500 people were able to enjoy this live concert while dancing along and even meeting the group. In the words of the band’s members, “It’s very cosy, honestly being surrounded by this atmosphere and this décor… you feel right at home. All hotels should be like this,” and “Working like this is like being on vacation. We’re having an amazing time.”

Our concerts are also based in solidarity, and part of the money raised from the performances and the available extras have been donated to the Unidos program, which forms part of the Save the Children organization fighting child poverty in Spain.

Worried you might miss our upcoming concerts? All you have to do is reserve your stay during the concert dates so you can start feeling the vibes of the hits from the 70s, 80s and 90s! And remember… you can even have the chance to meet the artists in person!*

*When booking a Meet & Greet with the group.